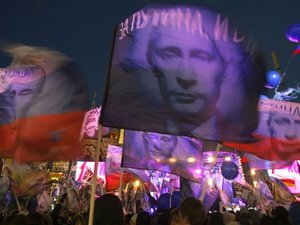 The United States on Monday urged Russia to conduct an "independent, credible" probe of election results that swept Vladimir Putin back to the Kremlin, amid widespread reports of irregularities.

But U.S. State Department spokeswoman Victoria Nuland, without mentioning Putin by name, also said the United States "looks forward to working with the president-elect after the results are certified and he is sworn in."

Nuland said Washington endorses the preliminary report of the observer mission of the Organization for Security and Cooperation in Europe (OSCE) and the Parliamentary Assembly of the Council of Europe (PACE).

The spokeswoman noted that the head of the PACE delegation found that "the election had a clear winner with an absolute majority."

But Nuland also noted the "OSCE concerns about the conditions under which the campaign was conducted, the partisan use of government resources, and procedural irregularities on election day."

She added: "We urge the Russian government to conduct an independent, credible investigation of all reported electoral violations."

At the same time, she said, as the OSCE pointed out in its report, the Central Election Commission had taken new steps to increase "transparency of the voting process since the parliamentary elections" in December.

"We urge Russian authorities to build on these steps to ensure that the procedures for future elections will be more transparent," it said.

"We are encouraged to see so many Russian citizens voting, monitoring voting in their local precincts, exercising their constitutional right to free assembly, and expressing their views peacefully about the political and electoral processes," she said.

"The number of Russian election observers who monitored this vote is unprecedented and a sign that Russian society seeks to participate in the improvement of Russia's democratic institutions," Nuland added.

"We also recognize the government's efforts to reform the political system," she said.

These include "the reintroduction of direct elections for governors, the simplification of party registration procedures, and the reduction in the numbers of signatures needed to register presidential candidates."

Gore had more votes by over 300000 or so. But Bush won by electoral votes. Plus they have a lot of irregularities too in USA. Like you said, who the hell are the americans lecturing everybody. Finally this man will stand up against their bullshit. The west and US wanted a puppet regime in Russia.

The US still want to control events, yet Russia proved their calculations wrong. Putin won big time. This man will stand in the face of the US and west, and stop them from manipulating every one. US is bullying everyone into submission. Anyway, I am very happy that he won.

@Flamethrower: There was a recount in the presidential election and it went all the way to the Supreme Court, meaning there was a credible probe of the election so the US asking one in Russia isn't contradictory. Read up on history.

@jcamerican: Putin is already weakened because for the first time since his reign people are openly challenging him in protests and questioning his election results. Putin's on the way down.

Flamer you opend your mouth one too many times and someone just shut it for you.

Putin is just another tyrant, there is a good reason for having term limits to power.

Flame, Enough had been screwed enough by Putin. His future had been shattered by the elections in Russia. His future in Lebanon is based on the fall of the Syrian regime, Hizballah disarming. If these things were to happen, the he will check what is left to accomplish his dream.

You must have a lot of free time on your hands with nothing useful for you to do. Go get a job and a life.

that's is your answer to him, cause you have nothing logical or facts to say. you following someone blindly if you think that reading about politics is him not having a life

Hi Mr. Vladimir Putin all the very best. do best in this world for your country.

You are right, I am not allowed to express my opinion about my government, but your syrian opposition can and should, and even fight. You are the intellect.

you guys are all giving flamethrower the wrong answer! please remember that it was the republicans who allegedly cheated on the democrats, foreign policy in the states is dictated by democrats until obama's term is over. so i don't see how a democrat goverment ( who got cheated on by the republicans) sound hypocrytical by asking for a " credible " probe?