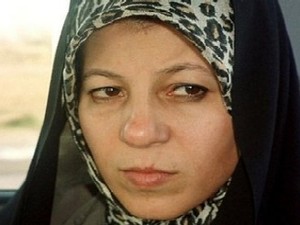 "Faezeh Hashemi, who was arrested as she led a number of anti-revolutionaries and rioters while claiming to purchase clothes in Vali Asr Street, has been released," the report said.

IRNA said that Faezeh was involved "numerous times in illegal gatherings" in the unrest after the disputed re-election of President Mahmoud Ahmadinejad in 2009.

The cleric and former two-time president had indirectly supported Mousavi against Ahmadinejad in the 2009 election after he himself lost to the hardliner in 2005.

His daughter Faezeh and her son Mehdi Hashemi -- a refugee in London -- were reportedly involved in Mousavi's election campaign.

Rafsanjani, in recent months, has distanced himself from the opposition leaders and also condemned Monday's anti-government demonstrations staged by their supporters. But his statement has not satisfied the conservatives.

Mohsen Rezai, secretary of the Expediency Council which Rafsanjani heads, has publicly criticized the cleric for his inaction against the opposition in recent days.

Mohammad Reza Bahonnar, an influential lawmaker, said on Sunday that Rafsanjani had "less than a week" to clarify his position, otherwise he would lose "legitimacy" in the posts he holds in two powerful regime bodies.

Besides the Expediency Council, Rafsanjani chairs the Assembly of Experts, a body which selects and supervises the supreme leader of Iran.

The demonstrations were called by a group owing allegiance to Mousavi and Karroubi.

The gatherings aimed to commemorate the seventh day of the killing of two people in Monday's protest in Tehran and to show "decisive support" to the two opposition leaders whose rebellion against the government has shaken the pillars of Iran's Islamic regime.

Tehran was the epicenter of deadly anti-government protests in 2009 after the re-election of Ahmadinejad as Mousavi and Karroubi refused to acknowledge his officially declared victory.

Both men ran in the 2009 election contested against Ahmadinejad.