One Killed in Yemen Unrest as Opposition Vows to Join Protests 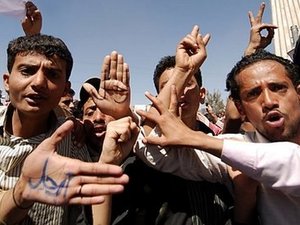 Hundreds of students demonstrated on Sunday on the eighth straight day of anti-regime protests in Sanaa, while police shot dead a protester in south Yemen and the opposition vowed to join protests.

In the capital, students gathered outside the university's campus chanting slogans demanding the ouster of President Ali Abdullah Saleh, in power for 32 years, an Agence France Presse correspondent said.

Around 100 Saleh supporters staged a counter-protest across the street, and police set up a cordon to separate the two groups.

Pro- and anti-Saleh demonstrators have clashed violently over the past week in Sanaa, with guns, batons and rocks all used.

On Sunday, police shot dead a protester in the southern regional capital of Aden, medics and witnesses said, raising the death toll in the restive city to 11 since February 13, according to an AFP tally.

The 19-year-old protester, identified as Amjad, died after a bullet hit his throat, medics said.

A protester was also wounded as police fired tear gas and bullets to disperse hundreds of people who took to the streets in the port city's Sheikh Osman neighborhood calling on Saleh to quit, the sources said.

At least 76 people, including seven soldiers, have been wounded in Aden since the protests began, according to an AFP tally based on figures supplied by medics and officials.

The Common Forum, an alliance of parliamentary opposition groups, said on Sunday that it will join the street protests and will not resume dialogue with the regime.

The opposition had responded to Saleh's calls earlier this month to resume dialogue, stalled since October.

But "after bloodshed and the fall of victims, and after the government has sent its thugs onto the streets ... we insist that there is no dialogue with bullets and batons," and with a regime "that brings thugs to occupy public places and terrorize people," a Common Forum statement said.

Meanwhile, Saleh has ordered security services to "provide the needed protection for journalists to help them carry out their job," the state news agency Saba reported.

Journalists must be able "to serve the truth and give the right information," he said late on Saturday after a group of reporters accused his ruling General People's Congress party of plotting attacks on the media.

"These attacks are organized and the ruling party is behind them," journalists said in a joint statement.

Dozens of journalists have been beaten during the past week.

Protests have become increasingly violent in poverty-stricken Yemen despite calls by Saleh -- who was elected to a seven-year-term in September 2006 -- for dialogue to form a government of national unity.

In Al-Tawahi, after police dispersed an anti-regime protest, around 200 supporters of the secessionist Southern Movement staged a pro-independence rally, a security official said, adding that police dispersed them as well.

On Sunday police arrested the main southern opposition leader, Hassan Baoum, after he arrived in Aden for an anti-government protest, one of his sons said.

Baoum was only released from custody earlier this year after being previously arrested on November 9. He heads the supreme council of the Southern Movement, the main organizer of protests in the south in recent months.

The movement wants either secession or increased autonomy for the formerly independent region, where residents complain of discrimination by the Sanaa government in the distribution of resources since union between north and south in 1990.

The south broke away again in 1994, sparking a brief civil war that ended with the region being overrun by northern troops.