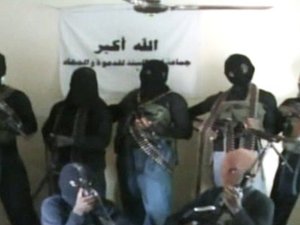 Troops in Nigeria's northern city of Maiduguri on Monday shot dead three suspected members of the Islamist Boko Haram sect as they allegedly tried to burn down a school, the army said.

"Around 3:00 am (0200 GMT) today, men of the JTF interrupted five suspected members of Boko Haram trying to burn down a school in the heart of Maiduguri metropolis," Lieutenant Colonel Hassam Mohammed told Agence France Presse by telephone.

"Three of the suspects were shot dead while two others were shot and injured. They are now in our custody," said the Joint Task Force (JTF) spokesman.

A number of homemade explosives which they allegedly intended to use in burning the primary school in the Lamisula district of the city were recovered, he said.

In less than two weeks, at least a dozen public and private schools in restive Maiduguri city, hotbed of Boko Haram, have been burnt by members of the sect.

The Islamist Boko Haram, whose name translates to "Western education is sin", had said it was behind some previous attacks, saying the act was in response to "raids" by soldiers on an Islamic seminary in the city.

A purported spokesman of the group, Abul Qaqa, on February 26 after the bombing of a church in the central Nigerian city of Jos, said the school attacks were over the "indiscriminate arrests of students of Koranic schools by security agents".

Sect leader Abubakar Shekau had issued a threat in January in an audio message in which his group claimed responsibility for a January 20 attack in the northern city of Kano that killed 185 people.

The sect, blamed for a wave of attacks mainly in northern Nigeria, had over the past two-and-half years targeted mostly the police and other symbols of authority in Africa's most populous nation.

It has lately added churches on its list of targets.

Although its specific aims remain largely unclear, violence by the sect since mid-2009 has claimed more than 1,000 lives, including more than 300 this year alone, according to Agence France Presse and rights groups.

"We have been able to link the activities of the Boko Haram sect to the support and training the sect received from AQIM (Al-Qaida in the Islamic Maghreb)," Air Chief Marshal Oluseyi Petinrin said, without giving further details.