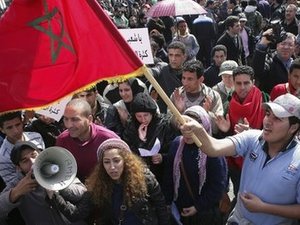 Thousands staged rallies in Moroccan cities on Sunday demanding political reform and limits on the powers of King Mohammed VI, the latest protests demanding change that have rocked the region.

Between 3,000 and 4,000 people took to the streets of the capital Rabat, shouting: "The people want change, denouncing corruption and calling for a democratic constitution to be adopted.

Demonstrations were held in other Moroccan cities, including Marrakesh and the port of Tangier.

The protests were largely peaceful though there were reports of some minor unrest after they ended.

The call has similar origins to the so-called "Facebook revolutions" that toppled decades-old regimes in Tunisia and Egypt and sparked deadly protests in Bahrain, Yemen and Algeria.

In Rabat, protesters carried banners that read: "The people want a new constitution."

"The prime minister must have broader powers and be accountable to the people," said 52-year-old teacher Ibrahim Abu Dahal.

"I want a Morocco that's more fair and with less corruption," said a student demonstrator in Casablanca who asked not to be named.

"We've got nothing against the king, but we want more justice and work," said another student who gave his name as Ibrahim.

After the protests, witnesses said groups of several dozen people looted some shops, lit cars on fire and threw stones at public buildings in several cities including tourist-hub Marrakesh and the northern port of Larache.

In Marrakesh, 150-200 people attacked and looted shops including a branch of restaurant chain McDonalds, a witness said.

Similar incidents took place in Larache, several witnesses said, with young people attacking some public buildings, including a police post and a customs office. In both cases security forces did not intervene, the sources said.

However police used tear gas against villagers of Al Hoceima after they lit fire to five cars and threw stones at a police station, witnesses said.

Ahead of the protests, Morocco promised to inject 1.4 billion euros in subsidies to soften price hikes for staples -- a key factor among others including rampant unemployment behind the spreading unrest in the Arab world.

That came despite comments by analysts that Morocco was unlikely to see Tunisia or Egypt-style unrest due to ongoing reforms by the king, who has ruled the country for more than a decade.

Observers say that despite widespread inequalities in Moroccan society the existence of some political pluralism and a relatively free press mean that the country has as yet been spared the mass protests sweeping other Middle Eastern and North African nations.

But calls have been growing for the king to have less say in government. The current system is a constitutional monarchy granting the king sweeping powers including naming the prime minister.

King Mohammed's cousin, Prince Moulay Hicham el-Alaoui, an academic at the U.S.' Stanford University known as the "rebel prince" for his outspoken criticism of his country's political system, voiced his support for the demonstrations.

"I'm for any initiative that calls for democratizing our political system, provided it is done peacefully and with tolerance. It appears that this movement fulfils these conditions and so I support it," he told France 24 television.

The prince, third in line to the throne, said that people wanted to see "progress and political reform in a monarchical context" and that he would welcome the monarchy evolving along the lines of that of Spain or Britain.