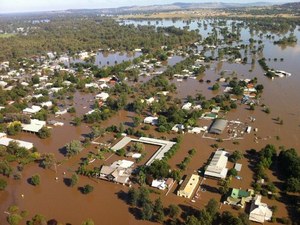 More than 8,000 people fled their homes in Australia's flood-hit southeast Tuesday amid fears that a levee holding back the swollen Murrumbidgee River would fail.

Floods have hit three eastern states this week, sweeping two men to their deaths after they attempted to cross waterways in cars while inundating hundreds of homes and causing millions of dollars in damage.

Prime Minister Julia Gillard said the military had been deployed to several areas and was on stand-by to help other stricken towns if the crisis deepened.

"We've got floodwaters across New South Wales, Queensland and Victoria," she told reporters.

"For the people of Wagga particularly, this is a very anxious time."

Some 8,800 people have been ordered to evacuate the city of Wagga Wagga and its surrounds where the Murrumbidgee is predicted to peak at 10.9 meters (36 feet), right on the levee's limit, later Tuesday.

"There is a significant risk that the levee will overtop or potentially breach," said State Emergency Service spokesman Andrew Richards.

Richards said while the levee was so far working to protect the commercial center of Wagga Wagga, across the river in North Wagga Wagga many of the homes from which 600 people had been evacuated were likely swamped.

"The reports we are getting from Wagga are that a significant number of homes in that area have been affected," Richards told Agence France Presse as the river rushed towards a level not seen since 1844.

Wagga Wagga has been hit by several significant floods since the earliest European settlement in the 1840s, and officials said residents had responded well to the latest evacuation order.

"I knew where my house lies -- if the levee were to overflow my street, it was pretty quickly going to go -- so I went," Melina Skidmore told state broadcaster ABC.

Mayor Kerry Pascoe said he had inspected the levee and it appeared solid but that in North Wagga Wagga some 180-200 homes were damaged -- ranging from water up to the roof to flooding on the grounds of the property.

"The river is slowing down," which could help reduce the peak level, Pascoe told Sky News.

Officials said while the flood would peak in Wagga Wagga later Tuesday, there were fears that the waters would create an ongoing emergency for weeks to come as the waters gushed to communities downstream.

Around New South Wales state more than 13,000 people have been asked to leave their homes due to flooding, with at least 250 properties already inundated and a number of rural communities isolated by the rising waters.

Officials were Tuesday doorknocking residents in the town of Forbes north of Wagga Wagga where the Lachlan River has created major flooding.

The National Farmers' Federation said while it was too early to put a cost on the disaster, cotton crops had been damaged, as well as grain silos, while many livestock had been swept away.

Eastern Australia was hit by devastating floods in early 2011 which claimed more than 30 lives, flooded thousands of homes and left vast swathes of the country swamped, including the Queensland capital Brisbane.