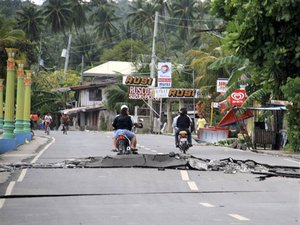 The quake's epicenter was traced near Masbate City on the central island province of Masbate in the Visayas region, the Philippine Institute of Volcanology and Seismology reported.

"There was panic, people were scared to go out," he said. "People were having breakfast and preparing to go to work and school when the quake happened."

Cracks appeared in some buildings in Masbate City, and many of its 90,000 residents had been told to stay home for the day, he said.

"There was an old three-story building that collapsed, but engineers had already condemned it long before the quake," he said, adding that there was no one inside the structure when it crumbled.

He said classes in all schools were suspended as city engineers fanned across the city to further assess the damage and ensure all buildings were safe.

The Office of Civil Defense in Manila said six aftershocks were felt within hours of the initial quake.

The Philippines is situated in the "Ring of Fire," a belt around the Pacific region frequented by earthquakes and volcanic activity.