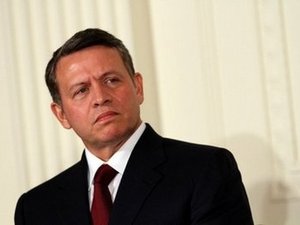 "When I talk about reform, it means that I want real and fast reforms," the king told government officials, MPs, senators and members of the judiciary, the state-run Petra news agency reported.

"Political reforms need to be modern. I am waiting for government recommendations about a mechanism for a comprehensive dialogue to help achieve political development."

The king called on the government and parliament to "move swiftly to deal with any issue related to corruption."

"If you suspect corruption, start an investigation immediately. If you find out that the corruption accusations are untrue, make this clear ... irresponsible talk harms the country," he said.

Jordanians have been demonstrating since January to demand political and economic reform, calling for an end to corruption and for suspected corrupt officials to be put on trial, regardless of their rank.

On Friday, witnesses and medics said that a mob wielding batons waded into a pro-reform protest in Amman injuring eight people in the first such violence since protests began in Jordan.

The government has condemned the violence, and Justice Minister Hussein Mujalli said on Sunday a probe into the incident was underway.