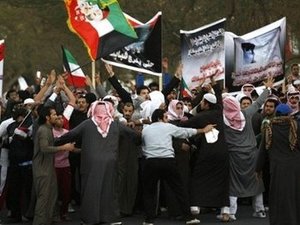 Hundreds of stateless Arabs demonstrated for the third day running on Sunday to press for basic rights and citizenship of the oil-rich Gulf state, an Agence France Presse photographer said.

Up to 300 protesters took to the streets in al-Jahraa, west of Kuwait City and around 200 demonstrated in Sulaibiya, south west of the capital, and the two protests remained peaceful unlike the previous two days.

Stateless Arabs, who are locally known as bidoons, claim entitlement to Kuwaiti citizenship, but the government calls them "illegal residents."

The New York-based Human Rights Watch on Sunday called on Kuwait to free all bidoons arrested during the protests and to find a swift solution to their problem.

A number of MPs, meanwhile, filed a request that part of a regular session of parliament on March 8 be allocated to debate and approve draft laws granting bidoons their basic rights.

Opposition MP Hassan Jowhar said he had information that a number of bidoon detainees were tortured by police and some were taken to the military hospital for treatment.

The interior ministry on Sunday denied in a statement that any protesters had died as a result of injuries.

The bidoons, who are estimated at more than 100,000, claim they have the right to Kuwaiti citizenship, but the government says many of their ancestors came from neighboring states and they are not entitled to nationality.

Kuwait launched a crackdown on the bidoons in 2000, depriving them of basic rights including the right to health, education and jobs, in a bid to force them to reveal what the authorities say are their true identities.

Because of stringent government restrictions, a majority of them are living in dire economic conditions in oil-rich Kuwait, where the average monthly salary of native citizens is more than $3,500 (2,575 euros).