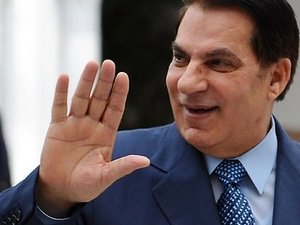 Prime Minister Mohamed Ghannouchi's government made the official request to Riyadh, where Ben Ali fled on January 14 with his family after weeks of popular revolt against his 23-year regime, said a foreign ministry statement cited by state news agency TAP.

The government acted "following a new batch of charges against the ousted president regarding his involvement in several serious crimes aimed at perpetrating and inciting voluntary homicide and sowing discord between the citizens of the same country by pushing them to kill one another," it said.

The caretaker government also asked Saudi Arabia for information about 74-year-old Ben Ali's health following reports this week that he had fallen into a stress-induced coma and was being treated in a hospital in Jeddah.

Radhouane Rouissi, Tunisian state secretary at the foreign ministry, said in televised remarks that the government was certain "Saudi authorities will give a positive answer to our demands, which are the demands of an entire people who suffered so much under Ben Ali's regime".

Sunday's requests came as Ghannouchi faced fresh demonstrations, including a protest by around 4,000 people in central Tunis, demanding his resignation.

In Sunday's rally many protesters waved Tunisian flags and banners proclaiming: "Resignation of the prime minister."

"We are against Ghannouchi's government because our revolution has led to nothing with Ghannouchi. This is Ben Ali's team and it has changed nothing," said teacher Samia Mahfoudh, 50.

Ghannouchi was prime minister under Ben Ali from 1999 until his ouster.

On January 17, he took the reins of a transitional government of national unity, which included many ministers who were part of the old regime.

The authorities have appointed a panel to prepare free elections due in six months while several opposition parties have demanded the election of a constituent assembly to write a new constitution.

The government also announced Friday a first set of urgent social measures and ordered reservists to join the army Wednesday to fill a security vacuum.

But protestor Sami Ben Moumen was unmoved: "They are taking us for fools."

Saturday, hundreds of Tunisians also marched to demand a secular state following the murder of a Polish priest, verbal attacks on Jews and an attempt by Islamists to set fire to a brothel.

Meanwhile hundreds of fearful Tunisians fled what they called "real carnage" in Libya on Sunday to head home via the coastal Ras Jdir border crossing, a union official told AFP.

"Hundreds of Tunisians left Libya Sunday through the Ras Jdir border post. There are a lot of people and there is a big bottleneck in the area," said Houcine Betaieb, a member of Tunisia's influential UGTT trade union.

"These are people who work there, who have left Libya out of fear that something would happen to them," he said.

Inspired by events in neighboring Tunisia, protests have erupted in Libya against the regime of longtime leader Moammar Gadhafi, who has responded with a violent crackdown that Human Rights Watch said had killed more than 170 people.