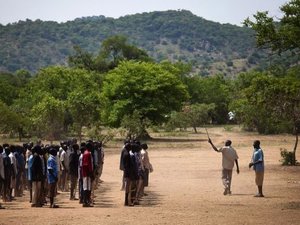 "Inside the Nuba Mountains, I saw burnt villages, destroyed food stores, and damaged schools and churches used by civilians to shelter from the fighting," Kapila told reporters in Nairobi after returning from the affected areas.

"I heard an Antonov (airplane) myself and watched women and children running away shrieking with fear, as well as fields on fire from dropped bombs destroying what little food crops were being planted."

Fighting in South Kordofan, a major battleground during Sudan's 1983-2005 civil war, broke out again in June as Khartoum moved to assert its authority against gunmen formerly allied to the now independent South Sudan.

Conflict spread from South Kordofan to rebel allies in Sudan's Blue Nile state in September, forcing over 100,000 people to flee.

"It was as the U.N. Resident and Humanitarian Coordinator for the Sudan in 2003-04 that I saw what genocidal violence was doing in Darfur. When I asked the world to heed my warnings, it looked away until it was too late," Kapila said.

"From what I have seen in the Nuba Mountains, I fear that much the same scenario is unfolding there. Will the world listen this time around?"

The war in Darfur between non-Arab rebels and the Arab-dominated central government erupted in 2003 and has left 300,000 dead and 2.7 million displaced people, according to the U.N. The Sudanese government speaks of 10,000 dead.

Fighters in the Nuba, the Sudan People's Liberation Movement-North (SPLM-N), have teamed up with rebels from Darfur's Justice and Equality Movement (JEM) to attack government troops.

More than 360,000 people have been internally displaced or severely affected by fighting in the two Border States, the United Nations says.

With Sudan severely restricting the work of foreign relief agencies in the war zone, international concern is mounting over malnutrition and food shortages in the area.

Kapila also visited refugee camps into neighboring South Sudan, where people fled from fighting but have still not found safety.

"Even here across the border, they have been bombed by Antonovs belonging to the Sudanese military," Kapila added.

The US has warned that up to half a million people face starvation or could flee to southern camps if Sudanese President Omar al-Bashir does not stop aerial bombardment and let aid agencies in before the rains start next month.

"After two seasons of badly disrupted agriculture, hunger is rapidly increasing in a wider region that is seriously food insecure anyway," Kapila added.

"Otherwise, I fear the worst for tens of thousands of civilians, including many women and children, who are too feeble or fearful to run for their lives."

The world has always turned away their eyes from facing and confronting the massive human rights violation by the Sudanese government. denying humanitarian access to civilians including women and children so as to starve them to death and also deaths due to diseases is a war crime that the world should have taken seriously and force the Sudanese government to respect rights to humanity and allow all needed aid into rebel held areas with out any reconditions. we appreciate efforts of the likes of Kapila, they must be listened to, for they are the voices of the voiceless people of Sudan