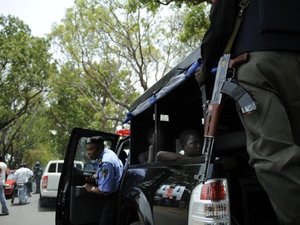 Attackers suspected to be from a rival ethnic group have stormed a remote area of Nigeria, killing at least 16 and burning homes in the latest flare-up of tensions in the region, police said Tuesday.

The violence broke out on Sunday when suspected members of the Fulani ethnic group descended on communities dominated by ethnic Tivs in Benue state in eastern Nigeria, Africa's most populous nation, a police spokesman said.

Local media put the death toll as high as 30, but police confirmed 16 dead.

"The precise number of people that were killed were 16," police spokesman Ejike Alaribe told Agence France Presse. "The information is that they came and opened fired sporadically, started shooting everywhere and started burning houses."

He said police had been deployed and calm had returned to the area.

Violence has flared numerous times in the area, with the dispute believed to be primarily over access to land. The Fulanis, who are mainly Muslim, are mostly herdsmen, while Tivs in the area tend to be Christian farmers.

Previous attempts to end the conflict have failed.