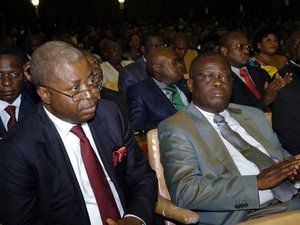 The government of the Democratic Republic of Congo headed by Prime Minister Adolphe Muzito has resigned more than three months after legislative elections, a spokesman said Tuesday.

"We are at the end of this legislature so the president must have his hands free to create a new government," he added.

Results for the presidential ballot were released in late December and returned Kabila who has been in power since 2001.

The polls were widely criticized as chaotic and riven with irregularities. Kabila's inauguration was largely snubbed by the international community.

The results of the legislative ballot were only announced on February 1, giving Kabila's party and its allies control of parliament, albeit with a reduced majority.

What is Rwanda's role in Congo, and what is Israel's role in Rwanda? And does the US know all about it?