EU Offers to Restart Talks with Iran on Nuclear Row 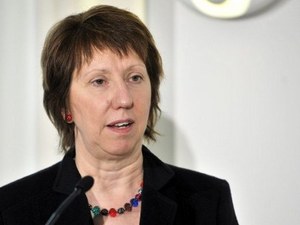 Global powers on Tuesday offered to resume long-stalled talks with Tehran over its contested nuclear drive that are key to defusing continuing tension between Israel and Iran.

"On behalf of China, France, Germany, the Russian Federation, the United Kingdom, the United States of America, I have offered to resume talks with Iran on the nuclear issue," said EU foreign policy chief Catherine Ashton.

A time and venue for what are variously known as the P5+1 or E3+3 talks -- five U.N. Security Council members plus Germany, or three EU powers plus China, Russia and the U.S. -- needs to be agreed, added Ashton, who represents world powers in the talks.

British Foreign Secretary William Hague said world powers aimed to show Iran their willingness to seek a diplomatic solution "by testing its desire to talk and by offering it the opportunity to respond to our legitimate concerns."

"It is for Iran to seize this opportunity," Hague said in a statement. "It is time for Iran ... to show the world that it wants a peaceful, negotiated solution to the nuclear issue."

Western powers suspect Iran is seeking to build a nuclear bomb, a charge denied by Tehran which says its atomic program is for purely peaceful purposes.

The move came amid fresh criticism in Israel against U.S. President Barack Obama for failing to flex muscle at Tehran in talks with Israeli leader Benyamin Netanyahu this week.

Obama gave a strong nod to Israel's refusal to contemplate a nuclear-armed Iran, acknowledged its right to self-defense and vowed he would "not hesitate to use force" where necessary.

But he made clear he would only contemplate a military option after all diplomatic paths had been exhausted and as new sanctions took effect.

In her letter Tuesday to Iran's chief nuclear negotiator Saeed Jalili, Ashton said: "Our overall goal remains a comprehensive negotiated, long-term solution which restores international confidence in the exclusively peaceful nature of Iran's nuclear program, while respecting Iran's right to the peaceful use of nuclear energy consistent with the NPT (Nuclear Non-Proliferation Treaty)."

The last round of talks, which took place in Turkey in January 2011, broke down, according to Western diplomats, over Tehran's demand to discuss "preconditions" before honing in on the nuclear dispute.

"The onus will be on Iran to convince the international community that its nuclear program is exclusively peaceful, by taking concrete actions," Hague said.

Global powers have offered to assist Tehran to develop civil nuclear power and cooperate in areas from political relations to economic development if convinced that Iran has no military intentions.

In a February 14 letter to Ashton, Jalili had said Tehran was ready to resume the deadlocked negotiations at the "earliest" opportunity as long as the powers respected its right to peaceful atomic energy.

Jalili's letter was a long-belated response to one from Ashton in October, stating a solution was possible only if the talks focused on addressing Western concerns over Iran's nuclear program.

U.S. Secretary of State Hilary Clinton last month noted some positive signs in Tehran's February note, saying it seemed to mark an acknowledgement from Tehran that the talks begin with a discussion of its nuclear program.

In a twin-track strategy, world powers have offered Iran economic and diplomatic incentives to engage in negotiations to stop uranium enrichment work or continue to slap fresh sanctions on the country.

Economic sanctions were ramped up over the past three months after the U.N.'s International Atomic Energy Agency said in a report it had evidence the Islamic republic appeared to be conducting research on atomic warheads.