Iran Says Ready to Give IAEA Access to Key Site 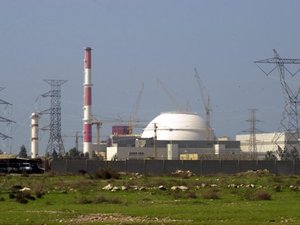 Iran is ready to give the U.N. nuclear agency access to its Parchin military base once agreement is reached on how to proceed on clarifying all issues, Tehran's mission to the IAEA said Tuesday.

The International Atomic Energy Agency said in November that it suspected Iran had carried out high-explosives tests in a large metal container at Parchin near Tehran, relevant to developing nuclear weapons.

"Considering the fact that it is a military site, granting access is a time-consuming process and cannot be permitted repeatedly," the Iranian embassy to the IAEA in Vienna said in a statement.

It said it had requested that the IAEA "combine all related issues ... and then once more, access would be granted" and that the "process could be obviously started" once there is agreement on how to resolve all issues.

It also said that in talks in Vienna in between two high-level watchdog visits this year to Iran, it had been agreed that the agency's request to visit Parchin would be "postponed" until after this week's IAEA board of governors meeting.

The IAEA has however made no mention of any such agreement, saying after the second recent visit on February 22 that it had asked during both trips for access to Parchin but that Iran "did not grant permission."

In a report circulated to IAEA members two days later, IAEA chief Yukiya Amano said that there were "major differences" with Iran over how to proceed in the agency's enquiry into the Islamic republic's nuclear program.

Iran says that the IAEA already visited the sprawling Parchin base in 2005, but inspectors did not examine the area where the explosives chamber was believed to be.

Amano said on Monday that there were indications of unspecified "activities" at Parchin, meaning that "going there sooner is better than later." Western diplomats suspect Iran may be removing evidence from the site.

Iran, which has been subjected to tighter sanctions since the November report, says its atomic program is peaceful and that it does not want nuclear weapons. The standoff has stoked speculation of possible Israeli air strikes.