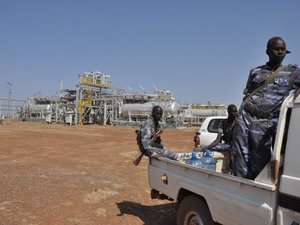 The U.N. Security Council on Tuesday demanded an end to border attacks and hostilities between Sudan and South Sudan in a forceful warning to the rivals to ease mounting tensions.

Amid widespread predictions that the two countries, which separated in July last year, could be headed for a new conflict, the council also demanded Sudan authorities allow humanitarian access to two conflict-stricken states.

"The Security Council demands that all parties cease military operations in the border areas and put an end to the cycle of violence.

"It further demands that the governments of Sudan and South Sudan take no action that would undermine the security and stability of the other, including through any direct or indirect form of support to armed groups in the other's territory."

The two sides are embroiled in a bitter dispute over oil revenues. Sudan has been accused of staging air attacks on South Sudan last week, while the Khartoum government accuses the rival South of supporting rebels in South Kordofan and Blue Nile states.

The Security Council called on the two sides to "agree an immediate cessation of hostilities" and stick to a February 10 non-aggression pact mediated by the African Union.

The council said it also "demands" that the Sudan government and rebels in South Kordofan and Blue Nile "cooperate fully with the United Nations and other humanitarian agencies" so aid can be brought to the populations of the two states on the border with the south.