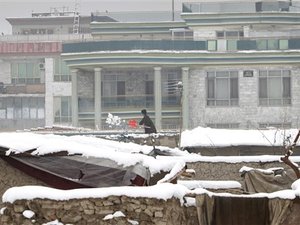 Rescuers shoveled through deep snow Wednesday searching for victims of an avalanche that destroyed a village of 200 people in northeastern Afghanistan, authorities said. Forty-seven people have been confirmed dead.

"We hope that some people were inside their homes and are still alive," said Shams Ul Rahman, the deputy governor of Badakhshan province, where the avalanche occurred on Sunday night. "But if the snow was too heavy, they may all be dead."

The Defense Ministry was sending helicopters to Dasty village on Wednesday to help with the rescue effort, Rahman said.

People from a nearby village were the first to reach the site. They were joined on Tuesday by rescue workers from Darwaz district, who walked for two days to reach the remote area.

About 100 rescuers equipped only with shovels were digging through mounds of snow looking for anyone who might have survived, Rahman said. He said initial reports were that only three women and one child survived the avalanche. They were not in the village of Dasty at the time.

The U.S. Embassy in Kabul expressed condolences to the families of those killed in the avalanche. USAID's Office of U.S. Foreign Disaster Assistance is planning to send supplies, such as tents and plastic sheeting, through a partner in Tajikistan to assist people in the area.

Deadly avalanches are common in Afghanistan's mountainous north in winter.