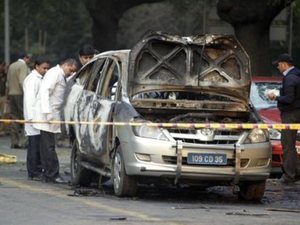 New Delhi police said Wednesday they had arrested a man in connection with last month's bomb attack on an Israeli diplomat's car, which Israel blamed on Iran.

Police spokesman Rajan Bhagat said the man was 50-years-old but gave no details as to the charges he faced related to the February 13 attack.

Police sources identified the suspect as Syed Mohammed Kazmi and said he was an Indian national who claimed to be a journalist working for an Iranian publication.

A 42-year-old Israeli diplomat, the wife of the defense attache at the embassy, was badly wounded in the attack when a motorcyclist attached a bomb to the back of her vehicle in central New Delhi.

Israel accused Iran of carrying out the car bombing which came on the same day as another attempted attack on an Israeli embassy car in Georgia.

A day later, Thai police arrested two Iranian men in Bangkok who are suspected of planning an attack on Israeli diplomats.

Tehran has denied any involvement in the alleged plots.