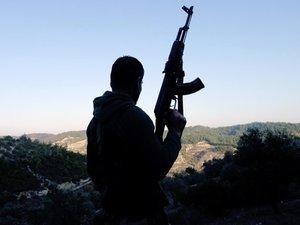 A female suicide bomber killed five police officers on Tuesday when she blew herself up at a checkpoint in the Russian Caucasus region of Dagestan, the regional interior ministry said Wednesday.

Two more people were shot dead by unidentified gunmen in a raid on a police station in another Dagestan town, Kaspiysk, in a surge of violence just days after Vladimir Putin was elected president.

"A woman set off a bomb with two kilograms of TNT on her body at the checkpoint in Karabudakhent village," the Dagestan regional police said on its website.

The suicide bomber's severed head was found tens of meters from the blast and investigators are working at the scene, the ITAR-TASS news agency reported.

In Kaspiysk, on the Caspian Sea, attackers also killed a police officer on duty Tuesday evening and a local resident after entering a police station and then fleeing by car.

The two gunmen had earlier hijacked the car and tied up the driver in the back seat. The vehicle and driver were later found in a different town.

The violence comes just two days after Putin triumphed in the Russian presidential polls, with official results in the Russian Caucasus showing support of over 90 percent.

Dagestan, a Muslim region known for its ancient culture and tapestry of ethnic groups, is fighting an insurgency by militants seeking to establish an Islamic state across the Russian Caucasus.

The region, which borders Chechnya, has experienced almost daily attacks against policemen and religious leaders that criticize militants.