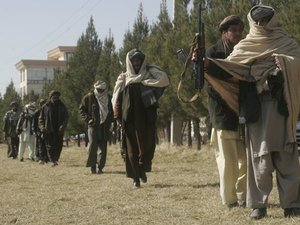 Four civilians were killed and 10 injured Wednesday when a remotely controlled motorbike bomb exploded in an Afghan town on the border with Pakistan, police said.

Officials blamed the attack in the town of Spin Boldak in Kandahar province on the hardline Islamist Taliban, that is waging a 10-year insurgency against the Western-backed government in Kabul.

"There was a motorbike bomb blast against border police in Spin Boldak. Four civilians, one of them a woman, were killed and 10 others were injured," said Janan, a rapid-reaction police unit commander who uses only one name.

The interior ministry confirmed the deaths and blamed the blast on the "enemies of Afghanistan" -- a reference to the Taliban.

Improvised bombs and suicide attacks are the most common weapons used in Taliban attacks. The rebels are particularly active in southern and eastern Afghanistan, along the rugged and mountainous border with Pakistan.

Afghan leaders accuse Pakistan of secretly helping the Taliban by providing hideouts and training facilities in secret camps across the border.

Pakistan denies the accusations and says it has lost around 3,000 soldiers fighting a local Taliban insurgency in the northwestern border areas with Afghanistan.