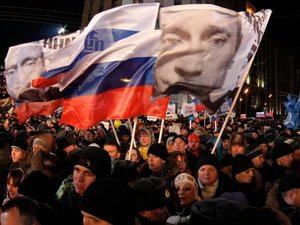 Russia's presidential polls won by Vladimir Putin were an "insult to civil society" due to mass violations, an activist group fronted by celebrities said Wednesday, refusing to recognize the results.

"Due to widespread violations, we consider it impossible to recognize the results of the presidential elections," the League of Voters said in a statement after Putin's crushing victory in Sunday's polls.

The League of Voters is an umbrella organization of activist groups set up in the run-up to the March 4 elections and fronted by anti-Kremlin celebrities like the rock singer Yuri Shevchuk and detective novelist Boris Akunin.

"We consider that on March 4 an insult was delivered to civil society. The institution of the Russian presidency, the electoral system and the whole state authority were discredited."

Putin won Sunday's election with 63.6 percent of the vote and in his victory speech declared that his win had been "open and honest". But NGO vote monitoring groups have alleged a swathe of cases of multiple voting and ballot-stuffing.