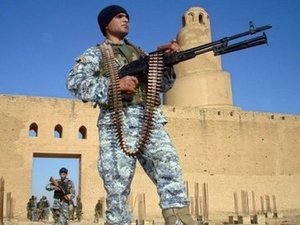 A car bomb detonated by a suicide attacker in the central Iraqi city of Samarra killed 10 policemen and wounded 16 others on Monday morning, police said.

The bomber rammed his explosives-packed vehicle into a compound for an emergency response unit which had been moved to the city to help with security for Shiite mourning rituals earlier this month, a police officer said.

Monday's attack comes after a suicide bomber detonated explosives inside a bus filled with Shiite pilgrims near Samarra on February 12, killing 33 and wounding 28.

Tens of thousands of people died in violence sparked by the destruction of the Askari shrine's gold dome by suspected Sunni extremists loyal to al-Qaida five years ago.