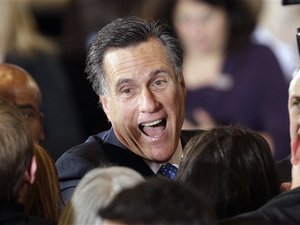 Mitt Romney edged out rival Rick Santorum in a nail-biter vote in Ohio as he tightened his grip on the 2012 Republican presidential nomination with a string of Super Tuesday wins.

Santorum kept his hopes alive with a trio of victories in North Dakota, Oklahoma and Tennessee, but Romney took six states: Idaho, Massachusetts, Virginia, Vermont, Alaska and, after a torturous wait, Ohio.

Former House speaker Newt Gingrich won resoundingly in his home state of Georgia, giving him an outside chance of rebooting his bid if he can gain some momentum in a clutch of upcoming battles in the conservative Deep South.

But it was the Rust Belt state of Ohio, which is expected to be a key battleground when President Barack Obama takes on the Republican nominee in the November 6 general election that was the story of the night.

Romney ended up taking the state by about 10,000 votes, or one percent of the vote, denying Santorum his central argument that he alone can compete against Obama in working-class, Midwestern swing states.

"There are three states tonight under our belt and counting," Romney told supporters in a ballroom in the Westin Hotel in Boston, with his wife Ann beaming proudly at his side, before the Ohio, Idaho and Alaska results were in.

"We will get more before this night is over. We're on our way," he said. "I'm not going to let you down. I'm going to get this nomination."

At a "victory" party in Steubenville, Ohio, Santorum loyalists cheered after he won Oklahoma, but the late Ohio loss was to leave a sour taste in their mouths.

Santorum, 53, a devout Roman Catholic who fiercely opposes abortion and gay marriage, has billed himself as the only authentic conservative in the race who understands working-class voters and can beat Obama in the fall.

"We have won in the West, Midwest, South and we're ready to win across this country," he told a rally amid ear-splitting cheers from supporters.

But Santorum's radical views have alienated some moderates, and after the Ohio setback serious questions will be asked about his electability.

Romney, 64, won a majority of the 10 states in play, but lingering doubts remain as he has struggled to win in the South, with Santorum and Gingrich sweeping Georgia, Tennessee and Oklahoma.

The mixed bag of results means there is still a long way to go in the state-by-state battle ahead of the Republican convention in August when the party's nominee will be crowned.

"At the last minute I did vote for Santorum," the 51-year-old media monitor said. "It was like (the children's game) 'rock-paper-scissors' in my head."

Hank McCormick, 65, voted for Romney and attacked Obama for failing to deliver as hard-hit states like Ohio struggle to emerge from a painful recession with a stubbornly high unemployment rate of 8.3 percent.

"I want a businessman in there, someone who understands profit and loss and who can beat the opponent," he said. "Three and a half years ago, everybody was looking for some change. Now I'm looking for a reverse."

Delegates are awarded by each state in the complex Republican Party nominating process, with one candidate needing to reach 1,144 delegates to declare victory. More than 400 delegates were up for grabs on Super Tuesday -- nearly 40 percent of the total needed to secure the nomination.

Romney was projected to extend his delegate lead but still faces a long march to the nomination. He has now won 13 states, while Santorum has won seven and Gingrich two. Texas Congressman Ron Paul has yet to notch up his first win.