Party Official: Bashir Not to Stand in Next Election 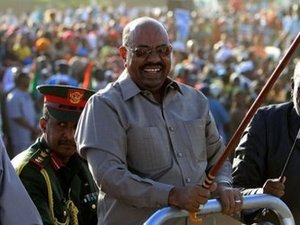 Sudanese President Omar al-Bashir will not stand for reelection, an official at his National Congress Party said on Monday, while insisting he was "not under pressure" from the wave of protests rocking the Arab world.

"I can confirm, 100 percent, that Bashir is not going to run for president in the next election. He will actually give a chance to different personalities to compete for the position," Rabie Abdul Ati told Agence France Presse.

"But he is not under pressure... This is not in the context of the change that is happening in the Arab world. It is happening because of the political strategy of the NCP to broaden participation," he added.

Bashir, who came to power in an Islamist-backed military coup in 1989, won a new term in office in elections last April, despite being indicted by the International Criminal Court for war crimes and genocide in Darfur.

They were the first multi-party polls since the 1986 election of the government that Bashir overthrew but were marred by accusations of fraud and an opposition boycott.