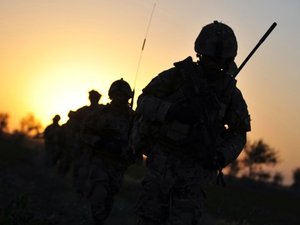 Six British soldiers are missing and are believed to have been killed in Afghanistan after an explosion hit an armored vehicle, Britain's Ministry of Defense said on Wednesday.

"I have the tragic duty to report that six soldiers are missing, believed killed, during a security patrol," said British spokesman Lieutenant Colonel Gordon Mackenzie.

The ministry said the soldiers had been on patrol in a Warrior armored vehicle on Tuesday in Helmand Province, the restive southern area where most British troops are based, when their vehicle was hit.

The servicemen's families have been informed, the ministry added.

If the soldiers are confirmed dead, it would take the total number of British forces personnel who have died while serving in Afghanistan to more than 400 since the start of operations in October 2001.

Defense Secretary Philip Hammond said the incident would not deter British forces from carrying out their role as part of NATO forces in Afghanistan.

"I utterly condemn those responsible for this incident who will ultimately fail to derail a mission that is protecting our national security at home and making real progress in Helmand," Hammond said.

"It is because of the continuing efforts of our Armed Forces, working alongside the Afghan National Security Forces, that we are on course to build an Afghanistan that can stand on its own two feet," he added.

Britain, which has over 9,000 soldiers in Afghanistan, is due to end combat operations in the country at the end of 2014.