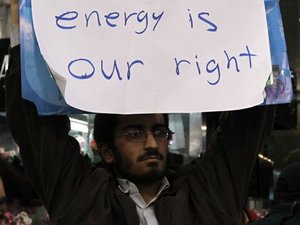 The U.N. atomic agency's board Wednesday adjourned talks until Thursday while world powers haggle over a joint statement on the possible resumption of negotiations with Iran, diplomats said.

The third day of a regular quarterly talks among the 35 nations currently on the International Atomic Energy Agency's steering committee at its Vienna headquarters were abandoned around an hour after they started.

Envoys played down any talk of major differences in formulating a joint text to be presented to the board; however, saying working out the exact wording was a normal process.

On Tuesday EU foreign policy representative Catherine Ashton said on behalf Britain, China, France, Russia, the United States and Germany that they were ready to hold talks with Iran.

It remained to be agreed where and when the negotiations would be held. The previous talks broke down in Turkey in January 2011.

The possible resumption comes despite an apparent deadlock between the IAEA and Iran over the Islamic republic's nuclear program -- which world powers want to be central to the talks -- after two visits to Tehran in January and February.

IAEA chief Yukiya Amano repeated in a report circulated to member states on February 24 that he has "serious concerns regarding possible military dimensions to Iran's nuclear program" after the visits.

During the two trips Iran again rejected a November IAEA report outlining a range of suspicious activities "relevant to the development of a nuclear explosive device" as based on false intelligence, Amano said.

Iran also denied access to the Parchin military complex where the IAEA believes explosives testing for nuclear warhead research took place, making a last-minute offer to allow access to another site which the IAEA rejected.

The two sides had "major differences" on how to precede, Amano said, with no other visits planned. Iran denies seeking to develop nuclear weapons, saying its nuclear program is peaceful, and has disputed the IAEA's version of events.

The IAEA says that because Iran's lack of "necessary cooperation" it is "unable to provide credible assurance about the absence of undeclared nuclear material and activities in Iran, and therefore to conclude that all nuclear material in Iran is in peaceful activities."

Because of this the U.N. Security Council has passed multiple sanctions calling on Iran to suspend the enrichment of uranium, which can be used for power generation but also, if highly purified, in a nuclear bomb.

Iran and ALL Arab countries should get out of NPT. It only serves the Israeli terror state.