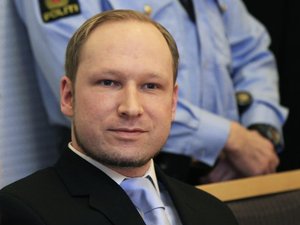 Anders Behring Breivik, who killed 77 people in twin attacks in Norway last July, was Wednesday charged with committing acts of terror, prosecutors said as they presented the formal indictment.

The 33-year-old right-wing extremist "has committed extremely serious offences on a scale that has never previously been experienced in our country in modern times," the 19-page indictment read.

The charges carry a penalty of up to 21 years in prison, although a provision may enable the term to be extended for as long as he is considered a danger to society.

The prosecution meanwhile said it was prepared at this stage to pursue the case on the premise that Behring Breivik was criminally insane and therefore not responsible for his acts, and as such is calling for him to be sentenced to confinement in a psychiatric ward.

But it reserved the right to alter that view if new elements emerged about his mental health by the end of the trial.

Police read the charges to Behring Breivik on Wednesday morning at the high security Ila prison outside Oslo where he is being held pending the beginning of his trial on April 16.

Afterwards, police officer Tore Jo Nilsen told reporters gathered outside the prison that the confessed killer had been "completely calm" during the 30 minutes it took to read the charges.

Behring Breivik's main defense attorney Geir Lippestad meanwhile told commercial broadcaster TV2 that his client "himself thinks he is criminally responsible and is disappointed that the prosecution has said it will call for mandatory psychiatric care."

On July 22, Behring Breivik, who has claimed to be on a crusade against multi-culturalism and the "Muslim invasion" of Europe, set off a car bomb outside government buildings in Oslo, killing eight people.

He then went to Utoeya island northwest of Oslo, and, dressed as a police officer, spent more than an hour methodically shooting and killing another 69 people, mainly teenagers, attending a summer camp hosted by the ruling Labour Party's youth wing.

The attacks will be viewed as two separate terrorist attacks, Inga Bejer Engh, one of two prosecutors on the case, told reporters Wednesday.

The diagnosis, which if supported by the court would rule out prison, sparked a wave of criticism, with many pointing to the years he spent planning the massacre and his calm demeanor as he executed his attacks.

But regardless of the findings of the second expert assessment of his criminal accountability, he will go on trial starting April 16 and it will in the end be up to the judge to determine whether he can be sentenced to prison.

If found to be criminally responsible, the perpetrator of the worst massacre on Norwegian soil since World War II would face the maximum prison sentence in Norway of 21 years behind bars, or the same sentence with a provision allowing for an indefinite extension of his term until he is no longer deemed a danger to society.

On the other hand, if he is found to be not criminally responsible for his actions, he will be locked up in a closed psychiatric ward, possibly for life.

The prosecutors meanwhile explained Wednesday that only the 119 people who had been killed and critically injured in the attacks had been named, pointing out that if everyone hurt and targeted in the attacks were to be named the court would need to deal with a list of between 600 and 800 names.