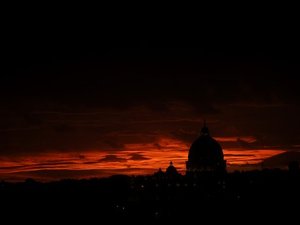 The U.S. State Department for the first time listed the Vatican as potentially vulnerable to money laundering, along with 67 other countries.

The department's annual International Narcotics Control Strategy report listed the Vatican as a "jurisdiction of concern" along with countries like Albania, the Czech Republic, Egypt, South Korea, Malaysia, Vietnam and Yemen.

It said the Holy See appears for the "first time" in the annual report.

Vatican City set up anti-money laundering programs for the first time in 2011 and it will take a year to start determining how effective they are, a State Department official told Agence France Presse on condition of anonymity.

It is "potentially vulnerable" to the problem as massive amounts of money flow into the Vatican from around the world, the official said.

"Jurisdictions of concern" are a notch below that of "jurisdictions of primary concern," which amount to a watch list of "major money laundering countries," the report said.

The latter is a wide-ranging list of 66 countries that includes Afghanistan, Australia, Brazil, the Cayman Islands, China, Japan, Russia, the United Kingdom, the United States, Uruguay, and Zimbabwe.

Interesting. I wonder if Israel, with mass schemes of ultra-orthodox extasy-selling rabbi and Mossad planes shipping drugs weekly between Amsterdam and Tel Aviv, is on that list?

Agree with u completely flame!
The united states of America is rasist and they think they know everything, in addition to being totally infiltrated by satanic organisations such as the illuminati and pro Jewish pro Islamic groups. The USA has no soul left.

Some watch a ot of movies and some just hate America because they were told to do so all their lives. In reality The Listing of the Vatican is not done by political entities and is based on economic Data.
I am a Catholic and I am not offeneded by the vatican being listed . Anything run by human beings is subject to corruption even the Vatican! Actually has setup anti money laundering programs in 2011....

@Flamethrower and Cedar: You must be the biggest idiots I've ever seen, US is anti Christian? 85% of Americans are Christian, every president has been Christian, almost everyone in government is Christian. It's funny because the other idiots are saying the US is launching a crusade against Islam and these idiots are saying they are pro muslim. Shows the level of stupidity in some people. Flame you should do a holy war on the Islamic states of America.

At youseffhaddad , I agree with you however the tone in which it was released indicates the listing in the report has alterior motives. At "idiots and the truth" who appear to be both guests here and probably Mossad or CIA agents or just brainwashed fools - do you not believe that Satan exists ? Or do u already work for him and u don't even know it (or mabye u do) . It is not about 85% of America being called Christian - it is about the actions of those 85% and - I'm sory to inform you that the entire world thinks Americans are the most ignorant and narrow focused people on the planet because they are brainwashed by the media ! Wether they believe in Muhammad or Jesus it makes no difference if you are not open to the thought that the USA is not number 1.