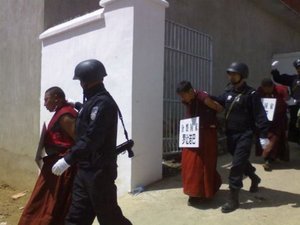 China has abandoned controversial plans to make it legal to "disappear" criminal suspects following a huge public outcry, in a move hailed as a victory for judicial reformers.

Proposed changes to China's criminal law being debated this week by parliament originally included a clause that allowed police to hold people suspected of terrorism or endangering national security in secret locations without notifying their families.

Secret detentions in China are already well-documented -- the renowned artist Ai Weiwei was among several dissidents to be taken to unknown locations and held for months without charge during a crackdown on government critics last year.

But rights activists said the clause, which had been excised from a final draft of the amended Criminal Procedure Law seen by Agence France Presse on Thursday, effectively legalized such rights violations and could encourage torture.

"The removal of the disappearance clause is a victory for legal reformers in China and a defeat of the security apparatus' attempt to further cement its power," said Nicholas Bequelin, a researcher at Human Rights Watch.

"If they hold you in a police station or prison, it's not good. But it's still very different from being kidnapped in the middle of the night, and put in a guesthouse somewhere and kept there for months."

There are three ways of locking up suspects in China before trial -- formal arrest, detention and residential surveillance at home or in other locations.

Critics say the latter is less formal as it takes place in random locations such as guest houses or hotels, where suspects can be held for months and where police may feel they have more of a free rein to torture them.

In the first two cases, suspects are locked up in formal areas of detention such as police stations or prisons, which people know about.

Under the final draft of the amended law, police have to notify the family that a suspect is being held under residential surveillance in an undisclosed location within 24 hours, no matter what his or her alleged crime.

The original clause had also stipulated this, but made an exception in cases of terrorism or national security, when notifying the family would "obstruct the investigation."

Chen Guangzhong, the influential chairman of the China Legal Society who has followed the law amendments closely, told AFP the removal of this clause was "big progress."

"I think this is a good sign, it shows our legislative bodies -- when integrating China's actual situation into their laws -- can also listen to other, different ideas. That type of progress is not at all easy," he said.

The amended law also stipulates that in cases of detentions -- legally different to residential surveillance -- police do not need to notify the family within 24 hours in terrorism or national security cases.

The proposal triggered an uproar when it was first publicized in August, and prominent activist Hu Jia compared it to methods used by the former Soviet Union's KGB secret police.

But experts said the removal of the clause would only be truly successful if it was properly implemented.

"It is too soon to tell whether this will be the case," said Bequelin.

"For years the Public Security has routinely ignored, with almost complete impunity, the procedural protections that were already in the law."