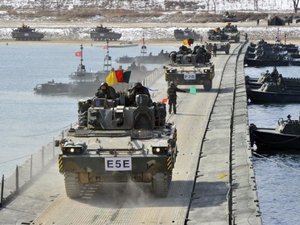 South Korean troops mounted a live-fire exercise near the tense border with the North on Thursday amid high tensions and in the face of Pyongyang threatening retaliatory strikes.

The one-hour exercise in Pocheon, the first of its kind this year near the land border, was a regular drill involving about 170 tanks, self-propelled howitzers, helicopters and four warplanes, a Defense Ministry spokesman told Agence France Presse.

Kim Sang-Ki, South Korea's army chief of staff, who watched the exercise, said: "We must hit back strongly and promptly if provoked by the enemy."

The North's new leader Kim Jong-Un last month inspected a coastal artillery unit, urging soldiers to launch a "powerful retaliatory strike" in the event of any provocation by South Korea.

The regime's resentment reached boiling point this month after a military unit west of Seoul allegedly hung up portraits of the North's leader and his father with slogans such as "Beat Kim Jong-Un to death".

On Tuesday, Pyongyang's state television aired footage of North Korean soldiers firing at Lee's name written on a target and hurling daggers at another target inscribed with the name of the South's defence minister.

"The people who shed tears of grief are now pledging to take revenge on the enemies," the North's official KCNA news agency said in a commentary on Thursday.

North Korea's troops and people were waiting for an order to stage a "sacred war", it said.

"All the people in the DPRK (North Korea) turn out in a war of retaliation with towering grudge at their sworn enemy with whom they cannot live under the same sky," it said.