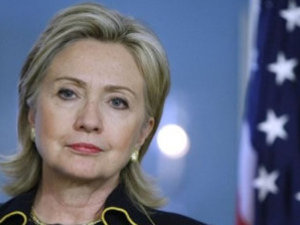 U.S. Secretary of State Hillary Clinton on Wednesday called on China to show in "concrete ways" that its rise is in the world's interest, saying that Beijing needs to take greater responsibility.

In a wide-ranging speech on relations between the Pacific powers, Clinton renewed U.S. calls on China to protect the rights of foreign businesses, adjust the "unfair" value of its currency and improve its human rights record.

Clinton adamantly rejected perceptions in Beijing that the United States is trying to contain China, and insisted that a stronger and more prosperous China would ultimately benefit both countries.

But Clinton said that China's growth means that it cannot "have it both ways" by asking to be treated as a rising power in some areas and as a developing nation with fewer responsibilities in others.

"The world is looking for China to play a role that is commensurate with its new standing and that means it can no longer be a selective stakeholder" in world affairs, Clinton said at the U.S. Institute of Peace.

"It is understandable that the international community wants some confidence that a country's growing power will be used for the benefit of all," Clinton said.

"Given the historic challenges to security and stability posed by rising powers, they do have a special obligation to demonstrate in concrete ways that they are going to pursue a constructive path," she said.

"This is particularly true for a country that has grown as rapidly and as dramatically as China has," Clinton said.

China announced Sunday that its military spending would top $100 billion in 2012, the latest sharp increase that has caused unease among Asian nations which claim Beijing has been increasingly assertive on territorial disputes.

Clinton recognized that China has taken a greater leadership role in a number of areas, including through its contribution to anti-piracy operations off Somalia and in efforts toward global recovery from a crippling recession.

But Clinton said that China needed to answer questions about its policies elsewhere -- and pointed to ongoing bloodshed in Syria.

"Will it use its power to help end brutal violence against civilians in places like Syria?" Clinton asked.

"Will it explain its military buildup and the ultimate goals of its military strategies, policies and programs... to reassure its neighbors, to avoid misunderstandings and to contribute to maintaining regional security?"

China joined Russia in vetoing two draft U.N. Security Council resolutions that would have pressured Syrian President Bashar Assad. After intense U.S. criticism, China sent an envoy to Damascus to promote a plan that would end the violence but allow Assad to stay in power.

Clinton renewed calls on China to address economic concerns including the value of the yuan, which U.S. officials say is artificially undervalued, and spoke of "long and profound disagreements" over human rights.

"We do believe -- not just in China, but everywhere -- in religious and linguistic differences, cultural differences, being respected," she said.

"Reforms that support these goals give people a greater stake in the success of their nations, which in turn makes societies more stable, prosperous and peaceful," she said.

More than 20 Tibetans have set themselves on fire over the past year in protest at what they see as repressive Chinese rule.

Chinese Foreign Minister Yang Jiechi, addressing the same forum by video link from Beijing, called on Washington to "honor its commitments" on Tibet and self-governing Taiwan, which Beijing claims as part of its territory, "so as to prevent setbacks in U.S.-China relations and ensure their steady growth."

"China is committed to peaceful development. We hope that the United States will see China's development in the right and objective way and take more steps to increase our mutual trust," Yang said.

The conference marked the 40th anniversary of U.S. president Richard Nixon's history-changing trip to China. Clinton said the United States has consistently tried to work with China since then and confirmed she will pay her latest visit to Beijing in May.