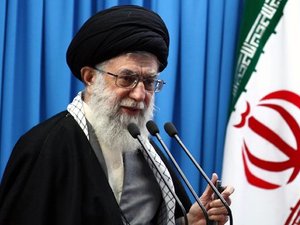 "This talk is good talk and shows an exit from illusion," Khamenei's website quoted the leader as telling clerics from the Assembly of Experts, the 86-member body which selects the supreme leader, supervises his activities and can dismiss him.

Obama on Tuesday said that Iran's nuclear program was not an immediate threat, arguing a "window" for diplomacy could forestall an Iranian bomb, while slamming Republican candidates for their hawkish statements demanding military action against the Islamic republic.

"But the U.S. president continued saying that he wants to make the Iranian people kneel through sanctions, this part of this speech shows the continuation of illusion in this issue," Khamenei added.

Obama stole some of the political limelight from Republican presidential hopefuls by holding his first White House news conference in five months as voters went to the polls in nationwide Super Tuesday nominating contests.

Obama slammed Republicans for "big talk" and "bluster" and failing to consider the costs of war with Iran.

His remarks came a day after Israeli Prime Minister Benjamin Netanyahu said he could not wait "much longer" for diplomacy on Iran to work.

The West and Tehran's regional arch-rival Israel suspect that Tehran is making atomic weapons under the guise of what it insists to be a civilian nuclear program.

Iran has been slapped with four sets of U.N. Security Council sanctions, apart from several other sanctions by U.S. and the EU on its oil and financial sectors for refusing to halt the uranium enrichment drive, the most controversial aspects of the nuclear program.