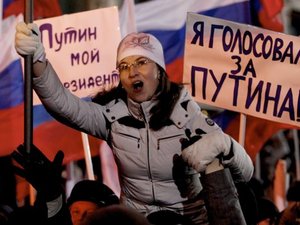 Vladimir Putin vowed Thursday to rule Russia as a "non-party" leader when he assumes power for a third term as president amid a wave of protests challenging his rule for the first time in 12 years.

"Today, it would probably be appropriate to recall that the president is a non-party figure," Putin told outgoing President Dmitry Medvedev in a televised meeting at the Krasnaya Polyana ski resort on the Black Sea.

"I will be working in the interests of the entire Russian people, irrespective of their party affiliations," Putin promised.

The former KGB spy is the leader of the ruling United Russia party that won a fraud-tainted parliamentary election in December that originally sparked the protests against Putin's era of domination.

Putin is not officially a card-carrying member of United Russia despite chairing the party. He has also recently attempted to distance himself from the group amid speculation that it may soon be either disbanded or reformed.

The idea of Putin presiding over Russia for an extended six-year term after a 2000-2008 presidency has stirred protests that are set to continue in Moscow on Saturday with a rally organizers hope can draw 50,000 people.

Medvedev is due to take on Putin's current job as prime minister after his inauguration on May 7 in a scheme first announced in September that angered many for apparently being cooked up behind closed doors.

Putin hinted on Thursday that his reform-minded rival Mikhail Prokhorov -- a tycoon who fished a surprising third with strong support from middle class voters in Russia's big cities -- could be given a spot in his new cabinet.

But Putin gave no clear indication Thursday if the new government's make-up will be made public before he is sworn in.

"Yesterday we began working on the things we have to do -- that we have to do together, as we had agreed," Putin told Medvedev in a signal that he intended to keep his promise and appoint him prime minister.

"Today, we are starting consultations on questions concerning the formation of the future government."

Medvedev for his part congratulated Putin with his "completely convincing" victory. The election commission on Thursday declared Putin winner with 63.60 percent of the vote on high turnout of 65.34 percent.