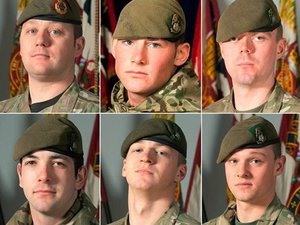 Britain's defense secretary insisted on Thursday that the country's troops are committed to their mission in Afghanistan, after the number of U.K. personnel killed in the conflict passed 400.

Ministers have expressed fears that the deaths of six soldiers killed when an explosion hit their armored vehicle in the southwestern Helmand province on Tuesday evening would prompt new concern over the 11-year-long campaign.

"The people on the ground are acutely conscious of the risks that they are running, but they are also incredibly proud of the job that they are doing and rightly so, and hugely satisfied by the level of public support that they have back home," Defense Secretary Philip Hammond told ITV television.

He said morale remains "extremely high, and it's high because the servicemen and women there know that they are doing a job and are doing it well and that is their professional commitment to get that job done."

His remarks came as Taliban insurgents claimed responsibility for the attack.

"Mujahedeen (holy warriors) of the Islamic emirate have reported that a land mine of mujahedeen blew apart a tank of British invading forces in Greshk district," the Taliban said in a statement on their website.

"All the invaders on board were incinerated," it added.