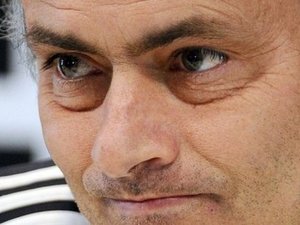 Real Madrid coach Jose Mourinho admits his side have two major psychological barriers to overcome when they travel to Lyon on Tuesday for the first leg of their Champions League last 16 tie.

Nine-time winners Real have fallen at the last 16 stage in each of their last six seasons and Mourinho believes that is something his team have to get over along with the fact that Lyon eliminated Real 2-1 at this stage of the competition last season.

"There are two barriers we have to overcome: getting into the quarter-finals and overcoming a Lyon team that eliminated us the last time we met," Mourinho said.

"I am not losing any sleep (over Lyon). Since the day the draw was made I have worked with my team to find out all the details about Lyon. We also have (Zinedine) Zidane who knows them well."

French legend Zidane is an advisor to Real president Florentino Perez and has been giving Real inside information on his compatriots.

Mourinho's team have won all 12 of their league home matches but have not been as convincing away from home, dropping 12 points on the road, and have had one day's less rest than their French opponents who played on Friday.

"I liked that my team played a serious match," Mourinho said. "These games ahead of Champions League matches can be complicated because players may focus more on the European competition.

"Levante were organised in defense, but we scored early and had things under control. Winning and resting players is what mattered."

"I picked a team that was good enough to win the game but with respect to our opponents," the Portuguese added. "We gave a rest to (Mesut) Ozil and Xabi (Alonso). Everyone knows they will play in Lyon against a team that have had 24 hours more rest than us, which is a lot."

Cristiano Ronaldo started against Levante and Mourinho said his countryman was feeling fit and didn't need to be rested ahead of the Lyon clash.

"Cristiano always likes to play. He is fine from a physical standpoint and does not feel tired, so why should I take him out?" asked Mourinho.

"Last year we were very close, but this time it will be totally different," the Portuguese striker told Spanish sports daily AS published Monday. "The coach is very experienced and knows how to win. We will go out there knowing that Lyon are a very difficult team in the Champions League.

"We have to think that they are Barcelona or Milan, because they are a tough opponent and physical," he said.

"We must have the ambition to win. We want to reach the final at Wembley" on May 28. "I consider us the favorites."

Mourinho has already won the Champions League with Porto and Inter Milan.

French international forward Karim Benzema scored the opening goal in the Levante win and hopes to get the chance to face his hometown club who sold him to Real for 35 million Euros.

"It is a difficult match against a good team," said Benzema. "I am especially looking forward to it because I have my friends and family there. I hope to beat Lyon and win the Champions League."