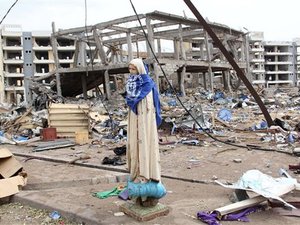 A blast in a Congolese munitions dump last weekend injured more than 2,300 people and left 14,000 homeless, with the death toll unchanged at nearly 200, the government said Thursday.

Planning Minister Pierre Moussa, who heads a panel investigating the disaster, told parliament that 13,854 homeless had been accommodated at reception centers and 2,315 wounded had received hospital treatment.

Of the injured, 297 were still in hospital.

Government spokesman Bienvenu Okiemy said the number of dead was still at nearly 200 following the explosions blamed on a short-circuit and fire.

"The center of the disaster is at three sites: the first one, which includes the tank area (where the munitions dump exploded), was destroyed at 98 percent," said Moussa.

Only buildings that were being constructed by a Chinese company resisted the explosion.

The second area was destroyed at 90 percent and the third also suffered substantial damage, he added.

Funerals will be held in the city center Sunday after a memorial service to be attended by President Denis Sassou Nguesso.