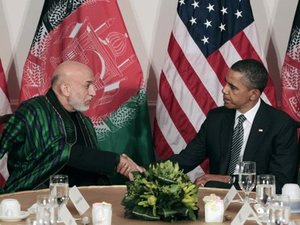 "President Karzai updated the president on the security situation in Afghanistan, which has calmed since the events of recent weeks," said White House spokesman Jay Carney.

Obama and Karzai also talked about Afghan-led reconciliation talks with the Taliban and other regional security questions, as well as the planned transition of security from NATO-led forces to Afghan control, Carney said.

"The leaders noted progress toward concluding a strategic partnership that reinforces Afghan sovereignty while addressing the practical requirements of transition.

"The president and President Karzai agreed that it is in both our interests to continue a partnership that is based on mutual respect, and they agreed to stay in close touch in the lead-up to (May's) NATO summit in Chicago."

The fallout from the burning of Korans at a U.S. base has complicated already troubled negotiations about the nature of the U.S.-Afghan relationship once NATO combat troops leave in two years' time.

The U.S. military has insisted the Korans were sent to the incinerator by accident and that the incident was unintentional.

But the Koran burning ignited days of violent anti-U.S. protests in which some 40 people died, plunging relations between foreign forces and their Afghan allies to an all-time low and forcing Obama to apologize.