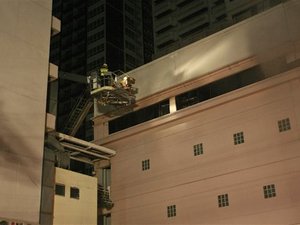 A fire at a high-rise hotel in Bangkok's main tourist district sent smoke billowing through the upper floors, killing at least one foreigner and injuring almost two dozen other people, authorities said Friday.

"People were panicked and some wanted to jump from windows. We had to tell them to wait and we sent cranes in to help," Rampan said.

One foreign woman who suffered from smoke inhalation was taken unconscious from the building and later died at a Bangkok hospital, said city official Wiparat Chaiyanukit. Her identity was still unknown.

The injured included two Thais and 19 foreigners, whose nationalities were not yet known, Wiparat said. Most of the injured suffered from smoke inhalation.

Investigators were still trying to determine the cause of the fire, which started on the building's fourth floor shortly before 10 p.m. and was quickly extinguished, but sent suffocating smoke to the upper floors at an hour when many people were in their rooms.

Scores of people were evacuated and rescue teams treated at least a dozen people with resuscitators.

The mid-range hotel, formerly known as the Grand Mercure Park Avenue, has 221 rooms and is located off Sukhumvit Road, a tourist and residential district popular with foreigners.

Last Saturday, a major fire broke out at an office building in a nearby neighborhood, doing major damage but causing no deaths.