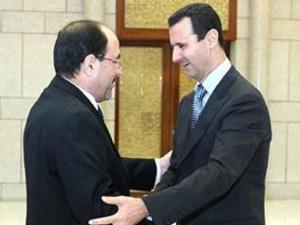 Iraq's Prime Minister Nouri al-Maliki is to visit Syria on Wednesday for talks with President Bashar al-Assad after a year-long spat between the neighbors sparked by massive bombings in Baghdad.

"Prime Minister Nouri al-Maliki is to start on Wednesday, tomorrow, a visit to Syria, our brother country, where he will meet his Excellency, President Bashar al-Assad, and Prime Minister Mohammed Naji Otri," it said.

"This visit aims to improve relations in the political, economic and commercial sectors in the interests of both countries," Maliki's office said in a statement issued on Tuesday.

It said Maliki's mission to Damascus was part of a series of visits "to different Arab capitals in response to invitations which he has received."

On Sunday, Iraq's ambassador to Damascus resumed his duties, more than a year after the spat sparked by massive truck bombs which Baghdad said were plotted in Syria, a charge denied by Damascus.

The envoys of Syria and Iraq were recalled by their respective governments in August 2009 in the wake of the bombings, which devastated the finance and foreign affairs ministries in Baghdad and left 95 dead and around 600 wounded.

Baghdad's government spokesman Ali al-Dabbagh said last month that the request for the extradition of the two men was still pending, but Iraq believed "relations need to develop with good will from both sides."