Schalke See off Hamburg to Stay in Touch 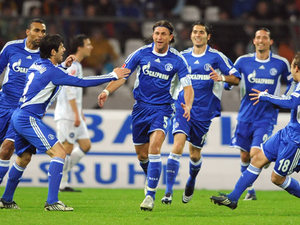 Schalke 04 defeated Hamburg 3-1 on Sunday to stay in touch with Bundesliga leaders Borussia Dortmund who finished the weekend with a five-point advantage at the top of the German league.

The Royal Blues took an early lead at Gelsenkirchen's Veltins Arena when Finland striker Teemu Pukki scored with a header after only five minutes from a superb cross by Japan defender Atsuto Uchida.

Hamburg scored what transpired to be a consolation goal just before half-time as Serbia midfielder Gojko Kacar profited from a mistake in the Schalke defence.

The win leaves Schalke fourth in the league and nine points behind Dortmund, while Hamburg drop to 14th and just four points from the relegation zone.

Werder Bremen kept themselves in the hunt for a Champions League place with a 3-0 home victory over Hanover 96.

The win leaves Bremen sixth, eight points from fourth, with the top four in the Bundesliga qualifying for the Champions League, while the sides finishing fifth and sixth go into the Europa League.

Defeat for Hanover left them seventh.

Dortmund were held to a goalless draw on Saturday which allowed Bayern Munich to trim the champions' lead in a 7-1 demolition of Hoffenheim with Germany striker Mario Gomez netting a hat-trick.

Bayern gave themselves a confidence boost ahead of Tuesday's Champions League clash against FC Basel.

With Munich already licking their wounds from last weekend's 2-0 defeat at Bayer Leverkusen, mid-week reports suggested coach Jupp Heynckes will quit at the end of the season, but he insisted he will see out the 15 months left on his contract.

Bayern responded to the pressure by blitzing Hoffenheim with five goals in 30 minutes during a devastating first-half performance.

Only a late own goal by Bayern's Luiz Gustavo offered Hoffenheim a consolation score.

It was only Bayern's fifth win in their 10 games since Christmas, but with third-placed Borussia Moenchengladbach being held to a goalless draw by Freiburg, Bayern are now three points clear of third with a huge goal difference.

Germany striker Lukas Podolski, who is reportedly set to join Arsenal at the end of the season, was shown a straight red card in Cologne's bad-tempered 1-0 home win over Hertha Berlin as the hosts finished with nine men.

Cologne midfielder Christian Clemens scored the first-half winner, but Podolski was one of three players sent off for what the referee deemed to be a head butt, although replays backed up Podolski's claims of innocence.

It was the first red card of the 26-year-old's Bundesliga career.

After their humiliating 7-1 defeat at Barcelona in the Champions League in midweek, Leverkusen slumped to a 3-2 loss at Wolfsburg, despite taking an early lead.

Mainz are up to 11th after a 2-1 win at home to Nuremberg as Egypt striker Mohamed Zidan continued his remarkable scoring run with his sixth goal in consecutive games, drilling home a free-kick on 22 minutes.