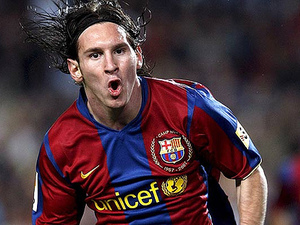 Lionel Messi continued his rich vein of form with a double as Barcelona beat Racing Santander 2-0 on Sunday, but the champions remain 10 points off leaders Real Madrid.

After scoring a remarkable five in the Champions League in midweek against Bayer Leverkusen, Messi scored in both halves, the second from the penalty spot, to take his total in the league to 30.

The Argentine still trails Cristiano Ronaldo by two in La Liga's scoring charts after the Portuguese hit a brace on Saturday as Real beat Real Betis 3-2 to maintain their surge towards what would be their first league title since 2008.