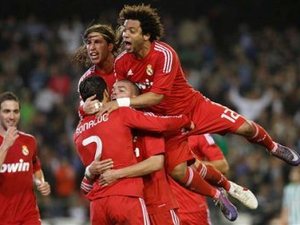 The Champions League could have one of the most diverse and understated quarterfinal lineups in its 20-year history if four of Europe's major powers fail to up their game in this week's last-16 second legs.

Unheralded APOEL, the first Cypriot team to reach the knockout stage of the competition, and Benfica, whose best days in Europe came in the 1960s, reached the last eight last week along with Barcelona and AC Milan.

Real Madrid, Bayern Munich, Inter Milan, and Chelsea — England's sole remaining team — are bidding to join the qualified quartet, yet all are far from sure of progress in one of the Champions League's more unpredictable campaigns.

Madrid goes into Wednesday's home game against CSKA Moscow in its best form in years, having just set a club-record 10 straight away wins in the Spanish league, but the nine-time European champions were held 1-1 by the Russian team three weeks ago.

Bayern is down 1-0 to FC Basel after the first leg in Switzerland, 2010 winner Inter lost 1-0 at Marseille and Chelsea slumped to a 3-1 loss at Napoli.

The English Premier League — Europe's richest division — will be without a representative in the Champions League quarters for the first time in 16 years if Chelsea fails to recover against Napoli on Wednesday.

Chelsea winger Juan Mata is taking inspiration from Arsenal nearly turning around a 4-0 loss against AC Milan last week, as well as his side's perfect European record at Stamford Bridge this season.

"In football, nothing is impossible," the Spain international said. "At Stamford Bridge this Champions League, we had good results in the group — 3-0, 2-0 and 5-0.

"All the supporters, for sure, will be cheering us. It's a final for us and I think we can do it."

Since the defeat in Italy, Chelsea has dismissed manager Andre Villas-Boas and put his assistant, former Italy midfielder Roberto Di Matteo, in temporary charge. Di Matteo has won his first two matches at the helm.

Napoli thrashed Cagliari 6-3 Friday for its sixth consecutive win in all competitions despite resting top striker Edinson Cavani for much of the match.

"We've still got a lot of work to do," coach Walter Mazzarri said. "We're going to have to play to the limit for the entire 90 minutes. This squad has a defect in that it's not able to maintain its level for all 90 minutes."

After seeing Barcelona light up the Champions League with its sparkling, Lionel Messi-inspired 7-1 demolition of Bayer Leverkusen last week, it is Madrid's turn to try to show why many people believe the team is ready to end its 10-year wait for an unprecedented 10th title.

Cristiano Ronaldo's double in a 3-2 victory at Real Betis on Saturday gave the Portugal forward 40 goals in all competitions this season and maintained his team's 10-point lead over Barcelona.

"The game against CSKA will be very difficult," said Madrid defender Marcelo. "There are no easy games (at this stage)."

After a long and dark stretch, Inter's form is finally starting to return ahead of the second leg against Marseille at the San Siro on Tuesday.

Inter beat Chievo Verona 2-0 Friday with late goals from Walter Samuel and Diego Milito to end an eight-match winless streak and bring tears to the eyes of coach Claudio Ranieri.

"This win comes just at the right time. It should give us the enthusiasm necessary to turn the result around," Ranieri said.

Three-time competition winner Bayern has doubts over striker Mario Gomez (shin and hip), winger Arjen Robben and defender Jerome Boateng (both minor knocks) after a 7-1 victory over Hoffenheim in the Bundesliga on Saturday, a result that provided the Bavarians with a timely boost ahead of Basel's visit.

"We have to keep playing this way. It can't be that we play differently again on Tuesday," Robben said.

Bastian Schweinsteiger came on as a substitute against Hoffenheim to make his return from a month out with an ankle injury.

His return is a timely one.