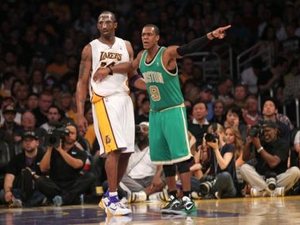 Kobe Bryant's 26 points included a go-ahead basket with 41.7 seconds to play as the Los Angeles Lakers defeated the Boston Celtics 97-94 in an NBA contest.

Lakers superstar Bryant on Sunday scored 10 points in the final quarter, but it was Andrew Bynum who capped the 8-0 scoring run Los Angeles used to close out the game.

The Lakers had fallen behind by five points with less than three minutes remaining. But they held the Celtics scoreless the rest of the way and Bryant and Bynum scored four points apiece as Los Angeles won for the 18th time in 20 home games this season.

"They made the shots down the stretch and we didn't," said Celtics guard Rajon Rondo, who had 24 points and 10 assists. "We had some good looks at the rim, but shots didn't fall and we couldn't get a stop."

Bynum finished with 20 points and 14 rebounds. Spain's Pau Gasol added 13 points with 13 rebounds and five assists for the Lakers.

The Lakers called a timeout, and when they returned it was Bynum who got the ball for a hook shot that secured the winning margin.

"Kobe came up with that play," Bynum said. "He said they're not going to know what to do and, sure enough, the way they designed it, Kevin Garnett started guarding me on the top side by the 3-point line, so it definitely worked."