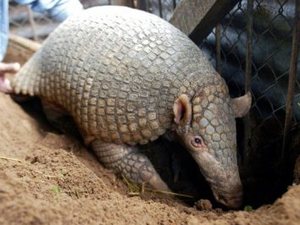 The mascot for the 2014 World Cup in Brazil will be an armadillo, according to a report on Sunday in the Brazilian weekly Veja.

The Brazilian three-banded armadillo, native to the country's north-east, is capable of rolling itself into the shape of a ball when it feels threatened.

Veja added that tournament organizers will only make an official announcement regarding their choice of mascot in October via FIFA.

The decision to make the armadillo mascot was backed by the Caatinga Association, a NGO whose mission is to protect the biodiversity of north-eastern Brazil.

The three-banded armadillo -- known as a 'tatu-bola' in Brazil - is an endangered species.

It has been chosen ahead of the puma as well as the 'Saci', a character in Brazilian folklore that was the preferred choice of Brazilian sports minister Aldo Rebelo, according to Veja.