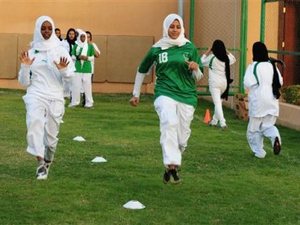 IOC President Jacques Rogge says he's optimistic that Saudi Arabia will send female athletes to the Olympics for the first time at this summer's London Games.

Rogge tells The Associated Press the IOC is in talks with Saudi Arabia on the "practicalities" of including women on its Olympic team.

Details of how many athletes and from which sport are still being worked out.

Rogge says a decision should be finalized within a month to six weeks, but "we are optimistic that this is going to happen."

Qatar and Brunei also have never included women in their Olympic teams.