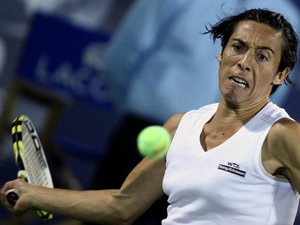 The 31-year-old Italian was a set down (6-2) in her third round match against Czech Lucie Safarova when she packed it in Monday, joining several others who have withdrawn or retired because of a virus, tournament officials said Monday.

Schiavone is a two-time French Open finalist and a winner in 2010. Last year she lost in the Roland Garros final to China's Li Na.

Czech Kvitova had already been eliminated in the singles draw on Sunday and was due to play a doubles match Monday when she withdrew, complaining of stomach flu.

"I have had it before a few years ago and it's not pretty," second seed Maria Sharapova said. "It's a great diet, but other than that it's horrible, especially for an athlete.

"There has been a few emails going around and just being extra careful.

"But it's pretty tough, I mean, considering you can't really escape it too much."

Officials said Zvonareva's virus is not believed to be the same as the other eight who have all complained of stomach problems.