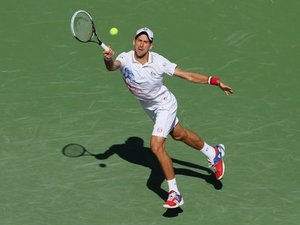 World number one Novak Djokovic continued his domination over Kevin Anderson, rolling over the South African 6-2, 6-3 in the third round of the ATP-WTA Indian Wells tournament.

Top seed Djokovic has now beaten Anderson four straight times, including three matches in 2011. After winning the Australian Open, defending champion Djokovic is now 12-1 for the season in his third tournament.

He will be hard-pressed to match his performance of last year when he had one of the best seasons in the history of the sport, but he is showing no signs of slowing down either.

"I think I served well and put a lot of pressure on him and returned really, really good," Djokovic said on Monday. "So I'm really happy with this win today. It wasn't easy."

The 24-year-old Serb advances to the fourth round, where he will play Spaniard Pablo Andujar, who beat countryman Albert Ramos 7-6 (7/5), 6-4.

Djokovic had five aces, was a perfect three-for-three on break points saved and won 67 percent of his first-serve points in the 97-minute match.

He broke Anderson twice in the first set and once in the second to go up 4-2, closing out the contest on his first match point when Anderson smacked a forehand wide.

"It was close," Djokovic said. "The score doesn't indicate how close it was. I played him a couple of times before and in most of our matches the first set goes for a half hour or more."

The 24-year-old Ebden said the win over the US number one was the biggest win of his career.

"Especially in America, to beat the top player here is, it's an incredible feeling," Ebden said. "Very big win. I'm pleased with my progress."

Ebden took his chance at 4-4 in the second set when the umpire called a hindrance penalty against Fish, who had called out a "Come on" before the ball was dead.

Fish lost his cool with the umpire and Ebden ended up breaking serve to go ahead 5-4. He served out for the match, winning all four points in the final game.

"It was right under the umpire's nose, so it was pretty clear what happened. I think umpire made the right call. Unfortunately he did say 'Come on' before I hit the ball," Ebden, who missed the shot, said.

"I did get there in reasonable time to hit the ball. I still had a decent play on it."

The Durban, South African-born Ebden, who now lives in Perth, Australia, is ranked 91st in the world and came into the tournament with a modest 4-5 record.

Ebden will next face another American, John Isner, who beat Juan Monaco of Argentina 7-5, 7-5.

It was a mixed day for the Aussies on Monday.

"After that loss in New York it has been hard," Petrova said. "I was very pumped coming out today. I wanted to turn everything around. I wanted to win and walk off the court with a W."

Stosur, who beat Petrova at the U.S. Open before going on to win her first grand slam title, has lost five of seven career matches to the world number 33 Petrova dating back to their first meeting at the 2004 U.S. Open.

Just six months ago Stosur became the first Australian woman to win a grand slam since 1980 when she captured the final major of the year in New York.

Sharapova, who is chasing the world number one ranking, advances to the fourth round, where she will play Roberta Vinci of Italy.

France's Marion Bartoli beat Chanelle Scheepers of South Africa 6-2, 6-0 and Lucie Safarova advanced when Italy's Francesca Schiavone retired from their match after the first set with a virus. Schiavone was behind 6-2 when she pulled out.