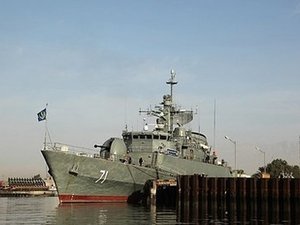 Israel put its navy on high alert and said it would respond immediately to any "provocation" as two Iranian warships sailed through the Suez Canal into the Mediterranean on Tuesday.

The Iranian vessels entered the southeastern Mediterranean after going up the canal for the first time since the 1979 Islamic Revolution, reportedly en route for Syria, in a move taking them past Israeli territorial waters.

Suez Canal officials confirmed the patrol frigate Alvand and support ship Kharg had completed the crossing after entering the narrow waterway at dawn.

A senior Israeli security source told Agence France Presse Israel would "not initiate any action" against the Iranian vessels, but if the Iranians deviated in any way that could be considered "a provocation" there would be an "immediate Israeli response."

The Israeli navy immediately went on high alert and the troops were briefed on how to respond in such an event, he said.

The 1,500-ton Alvand is normally armed with torpedoes and anti-ship missiles, while the larger 33,000-ton Kharg has a crew of 250 and facilities for up to three helicopters, Iran's official Fars news agency has said.

Both ships were built in Britain during the 1970s for Iran, which ordered them before the Islamic revolution.

Their passage into the eastern Mediterranean comes as the Arab world and the Middle East grapples with a vast wave of unrest and protests that is radically changing the political landscape, and leaving Israel increasingly concerned about its security.

"We are talking about an unprecedented Iranian military presence in the Mediterranean, and that is a provocation to which the international community must react firmly," foreign ministry spokesman Yigal Palmor told AFP earlier on Tuesday.

On Sunday, Israeli Prime Minister Benjamin Netanyahu denounced the ships' arrival in the region as an Iranian power play, just days after his Foreign Minister Avigdor Lieberman branded their voyage "a provocation."

"Today we are witnessing the instability of the region in which we live and in which Iran is trying to profit by extending its influence by dispatching two warships to cross the Suez Canal," he said.

"Israel views with gravity this Iranian initiative," his office quoted him as saying.

Animosity between Iran and Israel has grown under the presidency of Mahmoud Ahmadinejad, who has repeatedly spoken of the Jewish state's demise.

Israel also accuses Tehran of arming and funding Hizbullah in Lebanon and Hamas in Gaza.

Israel, which has the Middle East's sole if undeclared nuclear arsenal, suspects Iran of trying to develop atomic weapons under cover of a civilian nuclear program.

Tehran denies that charge and has in turn accused Israel of trying to sabotage its nuclear program and kill its nuclear scientists.

Israel has backed a U.S. policy of tougher U.N. sanctions against Iran while remaining open to dialogue.

But it has refused to rule out a resort to military action to stop Tehran from developing a nuclear weapons capability.