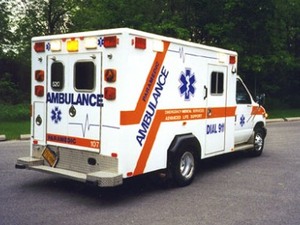 Bond was set at $50,000 for a 27-year-old Chicago man accused of stealing an ambulance over the weekend while two paramedics treated someone he apparently knew in the back.

Chicago Fire Department spokesman Larry Langford said Jimmy McCoy allegedly jumped into the stopped ambulance and drove off with the emergency lights on.

The paramedics then radioed that their ambulance had been stolen with them inside.

Prosecutors told a hearing Sunday McCoy seemed to think he was driving his diabetic friend to the hospital.

In the Saturday incident, McCoy only made it a few blocks before a fire truck blocked the road. Police surrounded the ambulance and McCoy was arrested.

There was no telephone listing for a Jimmy McCoy at a home address provided by authorities.(AP)

Way to use the internet to help people solve prloebms!