Gerrard Treble as Liverpool down Everton 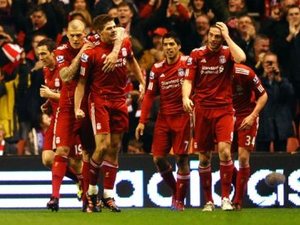 Steven Gerrard marked his return to Liverpool's starting line-up with a hat-trick as Kenny Dalglish's side returned to winning ways with a 3-0 win over Everton in the Merseyside derby on Tuesday.

Gerrard, who has been plagued by injury this season, became the first player since Ian Rush in 1982 to score a treble in the fixture as David Moyes's 10th anniversary celebrations in charge of Everton fell flat at Anfield.

Liverpool's first win in four league games lifted them to within two points of sixth-placed Newcastle while Everton's first defeat in 10 games continued their miserable record at Liverpool, where they have not won since 1999.

They might have secured the League Cup last month, but Liverpool's results since the beginning of 2012 have been anything but impressive.

Dalglish's side had lost five of their previous eight top-flight outings prior to this game.

Everton made the short journey to Anfield on the back of a nine-match league and cup run, but Moyes risked criticism from his own fans after resting the likes of Tim Cahill, Phil Neville, Leon Osman, Nikica Jelavic, the goal-scoring hero in the last game against Tottenham, Royston Drenthe and John Heitinga ahead of Saturday's FA Cup quarterfinal with Sunderland.

Liverpool started with Gerrard for the first time since suffering a hamstring problem, and the influential midfielder was at the heart of his side's high-tempo start as Dalglish's side looked determined to avoid an embarrassing fourth straight league defeat.

It needed a stunning seventh minute save by Tim Howard to deny Gerrard after Luis Suarez's defense-splitting pass.

Everton's United States keeper stood his ground to beat away Gerrard's fierce shot, with Jack Rodwell marking his return with a goal-saving block to keep out Jordan Henderson.

In an entertaining start, South African midfielder Steven Pienaar fired over the bar from a good position in front of ther Kop after clever work by Leighton Baines.

Eleven red cards have been shown in the last 14 meetings between the neighbors from across Stanley Park.

But referee Phil Dowd did not even have to produce a yellow in the first half despite the frantic pace of the derby.

Any hopes Everton had of clawing their way back into the derby vanished early in the second half when Gerrard produced another deadly finish.

Suarez did all the hard work, the Uruguay striker cutting into the area and breezing past Sylvain Distin as if he did not exist.

Gerrard took the ball off the former Ajax player's toes and gave Howard no chance with a thumping finish in front of the Kop.

It was one-way traffic. Carroll was unfortunate with a low effort which fizzed just wide before full-back Kelly also went close.

Everton had not lost at Anfield by two clear goals for six years.

But Rodwell's attempts to haul his side back into the end ended with Jose Enrique clearing his low cross before Moyes made a triple substitution.

Jelavic, Osman and Drenthe were all thrown into the action but, on a night when Liverpool were full value for their win, the changes made little difference.

Indeed, Gerrard added to Everton's misery when he scored from close range in stoppage time after more good work by Suarez.